The exhibition is the first to compare artists Boris Lurie and Wolf Vostell
on the theme of their joint approach to the Shoah.
29 January - 29 May 2022
KUNSTMUSEUM DEN HAAG
Den Haag, Netherlands
read more

BORIS LURIE: Nothing to do but to try

A Living Memorial to the Holocaust

Boris Lurie exhibition at the Lipke Memorial Museum in Riga

Boris Lurie exhibition at the Lipke Memorial Museum in Riga

Watch THE LIFE OF BORIS LURIE in the Boris Lurie & NO!art virtual gallery.

by the BORIS LURIE ART FOUNDATION

contains Lurie's most important paintings, drawings, collages, sculptures and more, as well as, a NO!art show with works by

Over 250 significant works are on display.

a visualization of the MARCH GALLERY,

as well as, the GALLERY: GERTRUDE STEIN

presenting over 50 photos, statements and other files of these legendary galleries

Discover the new Library which includes

Explore over 500 files available online to learn more about the art and life of Boris Lurie.

Sunday, May 3rd at 8pm (Washington DC time) on ZOOM
a repeat of Dr. Eva Fogelman's talk on Boris Lurie: The Art of a Survivor

Please RSVP to charles@politicsartus.org to receive a link and a password to enter the ZOOM Room where the discussion will take place. Kindly mention in your email which event you are RSVPing to

Boris Lurie and his dog Punch in the studio circa 1970. © Boris Lurie Art Foundation
This event has been Rescheduled for
Sunday, April 26 at 2:00pm
Dr. Eva Fogelman will lead a discussion on Boris Lurie
﻿The Center for Contemporary Political Art
916 G Street NW, Washington, DC 20001

Boris Lurie NO with Linoleum, 1962, oil paint on linoleum on board. Detail. © Boris Lurie Art Foundation
Eva Fogelman is a psychologist, author, filmmaker and pioneer in the treatment of the psychological effects of the Holocaust on those who survived, and their families.
She will talk about Lurie's motivation for creating the political art in the exhibition; the lifelong trauma he suffered as a result of the Holocaust; his worldview; the significance of his art; and what we–and future generations–can and should, learn from it.
Dr. Fogelman has written extensively about Boris Lurie and his art. Her essay in the BORIS LURIE IN AMERICAcatalogue is titled A Holocaust Survivor Artist Infuses Meaning Into His Creativity.
Born to Holocaust Survivors in a displaced persons camp in Germany, Dr. Fogelman lived in Israel before her family emigrated to the United States in 1959. She holds a doctorate in social and personality psychology from the CUNY Graduate Center and did her post-graduate training in family therapy and psychoanalytic psycho-therapy at the Boston University School of Medicine.
The Center for Contemporary Political Art (CCPArt), the United States’ only nonprofit arts institution dedicated exclusively to showing political art, is currently hosting a ground-breaking three-month retrospective exhibition of Boris Lurie’s political art.
This event is free and open to the public, but seating is limited, so please RSVP.
Boris Lurie in American: He Had the Courage to Say NO!
On view from January 26 through April 26, 2020.
Open Wednesdays 11am-6pm, Thursdays from 11am-8pm, and Friday - Sunday from 11am-6pm.
The Center for Contemporary Political Art
916 G Street NW, Washington, DC 20001 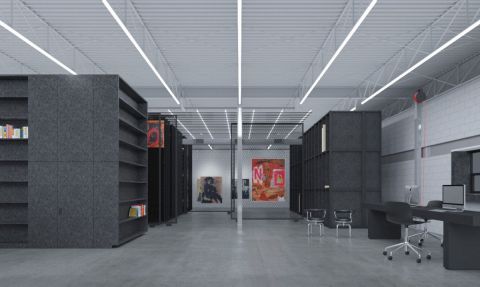 The Boris Lurie Art Foundation is excited to unveil its state-of-the-art 4,000 square foot space in Clifton, NJ. Award winning architect Julian von der Schulenburg has created a versatile space inspired by the industrial shell of the warehouse-like building. Incorporated into the design is a gallery space where the Foundation can host curators to view the over 3,000 works in its collection. In addition to the viewing area, ample space is provided for open art storage, restoration facilities, an archive room, and a research library.

We are happy to welcome you to the opening of the exhibition on November 15, 2019 at 5 PM in Odesa Fine Arts Museum.

Exhibition at The State Russian Museum

Altered Man is an important metaphor of the twentieth as well as the twenty-first centuries; of history and politics that try to erase and deface the individual. Boris Lurie (1924-2008), Soviet-born American non-conformist artist and writer, founder of the NO!art movement was one of the first to raise questions that had long been in the air: the disappearance of individuality, the entropy of personality – and thus of reality.

Boris Lurie’s art is deeply intertwined with the Holocaust. His Altered Man exhibit is a conversation about the end of metaphysics, which is “impossible after Auschwitz.” Lurie, a survivor of four concentration camps, believed that the only moral path in the context of the “total concentration camp” of modern reality is rebellion, and chose scathing criticism as his mode of expression. The vision of the world as both a concentration camp in which people ruthlessly destroy one another, and of the world as a brothel, in which people, particularly women, are objectified—this was the touchstone and the thread that runs through Lurie’s art.

Altered Man is a precise diagnosis of its time. The works presented in the exhibition can be seen as a Dadaistic gesture of destruction. The hated object or character is transformed and effaced. Evil in all its guises is neutralized by erasing it and removing it from the historical record.

Lurie’s art rebels against bourgeois values, be they moral, aesthetic or institutional, and instead stakes out a position of civic and personal liberty and independent expression. This is precisely why the current exhibition of Altered Man in Ukraine is a notable sign of the openness of contemporary Ukrainian society.

NO!art exhibition at the JANCO-DADA Museum in Ein Hod, Israel on July 20th and opening of the BORIS LURIE & DADA STUDY CENTER

BORIS LURIE and NO!art at Museum of Modern and Contemporary Art Koroska, Slovenj Gradec, Slovenia. On view until June 2, 2019

Pop-art after the Holocaust

Boris Lurie (1924–2008) was an American artist, who was born into a Jewish family in Leningrad (today Saint Petersburg). He spent his childhood in Riga. In August 1941, the Germans began the deportation of the Jewish population to the ghetto. The artist’s mother, sister and grandmother as well as the artist’s teenage girlfriend were shot in the Rumbula forests on the outskirts of Riga in December 1941. The Rumbula massacre was one of the greatest atrocities to be carried out in the course of two days by the Einsatzkommandos, in which some 30,000 Jews were killed. Boris and his father found themselves in concentration camps in Stutthof, and then in Buchenwald, from which they were liberated in May 1945. Shortly after the war ended, they emigrated to the USA. Until the end of his life, the artist lived and worked in New York.

Lurie’s creative output encompassed many fields: he was a visual artist – creating paintings, installation and objects – as well as a writer and poet. His activity as he saw it was a form of protest against pop art and abstract expressionism – prevalent in the USA at the time. He did not care whether his art gained acclaim on the artworld market. Together with Stanley Fisher and Sam Goodman, he founded the NO!Art movement. To Lurie, “‘NO’ means not accepting everything that you are told and thinking of yourself. And it is also an expression of dissatisfaction.” His was art that was politically engaged and called for social action, art that was spontaneous, anarchic and therapeutic.

Boris Lurie was psychologically affected by the Holocaust and his art was irrevocably linked to that experience – a ceaseless attempt to work through the trauma of war. Lurie created a unique symbolic language, in which authenticity and emotional tension went beyond the accepted norms of what is deemed appropriate. The recurrent leitmotifs of his work are footage from concentration camps, the Star of David, snaps of pinup girls cut out from magazines and the word ‘NO’ – given prominence in many of his works.

The artist’s legacy – the majority of his works and archival material – are the property of the Boris Lurie Art Foundation in New York. The mission of the Foundation is to preserve and bring before the public the art of Boris Lurie, while making the viewers aware of the complex issues that were the impetus of these works.